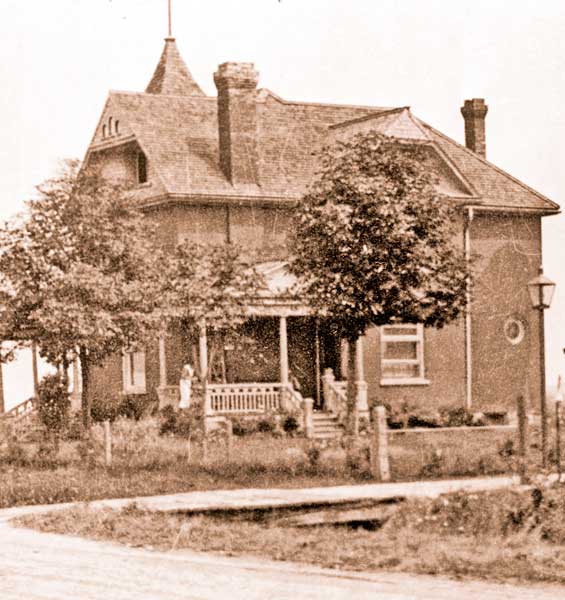 Catin wined and dined potential investors in his home or in the New Balmoral Hotel. He was looking for investment capital for both St. Joseph’s development (its infrastructure and industrial/manufacturing base) and for his deep-water canal project.

Potential investors arrived in Hensall on the Huron & Bruce Railroad in the evening and driven to St. Joseph in horse-drawn carriage or in Cantin’s Stanley Steamer car.

It would be dark by the time they reached St. Joseph, but the community’s homes and buildings would display the maximum amount of light giving the impression St. Joseph was bigger than it was. After an evening in The New Balmoral’s bar, likely listening to Cantin’s persuasive sales pitch, they would leave early in the morning to catch the train in Hensall and therefore leave before gaining an accurate picture of the real size or scope of St. Joseph.

In addition to the wharf, canal and local roads, Cantin envisioned a rail route moving passengers and freight from Stratford, westward through Hensall and Zurich to the St. Joseph Wharf (40 miles/64km) and south to Grand Bend and Parkhill where it would connect to the Grand Trunk Railway line to Sarnia. Proposed service would offer passenger travel 15 hours per day with freight moving at night.

To help finance the railroad, Cantin sold his St. Joseph properties to Joseph Laurendeau of Montréal for $50,000 cash and $26,000 in mortgages. Laurendeau and fellow investors organized the St. Joseph Land Improvement and Manufacturing Company Limited to continue developing St. Joseph.

According to the railway’s promotional material, “a remarkable inducement in favour of the proposed railway is that, living within five miles on each side of this route, between the City of Stratford and St. Joseph, and also between St. Joseph and the Town of Parkhill, there are now over 100,000 people utilizing about 256,000 acres of land within easier access to this proposed road than to any other competing railway.”

Right-of-ways were purchased and engineers hired to survey the road bed, while Cantin canvassed potential local investors. Local officials were either opposed to or indifferent to the idea. The railway never progressed beyond the planning stages.